Campaign of the Month: January 2021 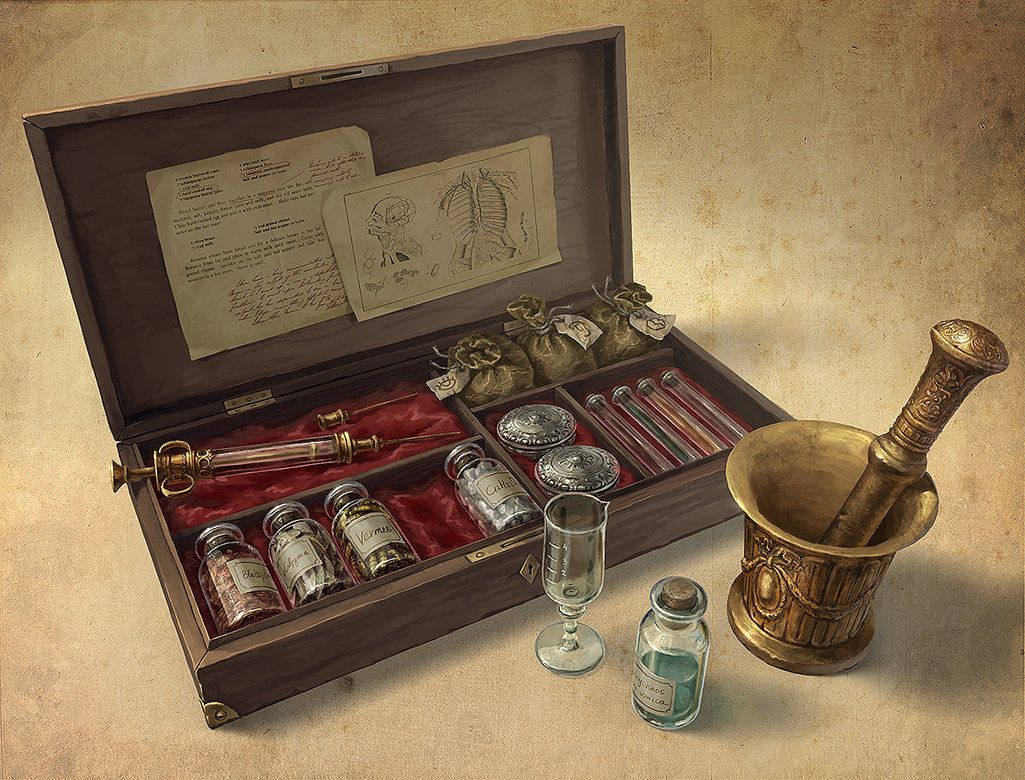 The PHB states that poisoned creature has disadvantage on attack rolls and ability checks, and that poisoned weapons do extra ‘poison’ damage.

But in this world there are a wide array of poisons that can have various effects, and an expert poison expert can take advantage of that. Poisons are crafted from reagents of which there are many types.

a base reagent is always a poison or venom in itself. It MUST be harvested from a creature (such as the venom of a rattlesnake or the skin of a poisonous frog).

an augmentation reagent improves a poison’s damage, effectiveness or both. It does not have to be a poison or venom. It can be harvested from any creature, herbal source or alchemical source.

A player must use a Nature or Arcana check (DM’s discretion depending on the source) to harvest a reagent. 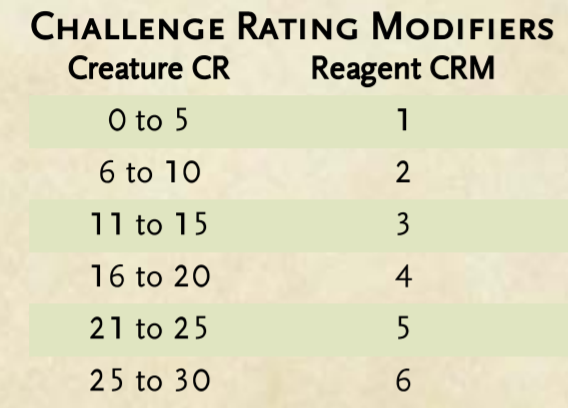 Reagents can also be bought from unscrupulous suppliers. The same equation can be used to harvest a one shot use of a creature’s poison without crafting, however there are downsides to this: only 1 dose of the poison can be harvested regardless of the roll, it will never be as potent as the poison being properly crafted, and the Save DC is much lower (snake venom on a blade is not delivered as effectively as snake venom directly from snake fangs). The difference is between milking a dose of venom from a recently dead snake and harvesting the venom gland which can be used to craft multiple doses in a concoction that is more suitable for an assassin’s delivery. The player must declare before the harvest roll whether they intend to harvest for crafting or an immediate one shot use.

The player must make an Intelligence Check:

There must always be a Base Reagent, the rest are optional. Proficiency in poisoner’s kit and access to one allows the player to add their proficiency bonus their Intelligence Check. Players without the poisoner’s kit proficiency have a 50% chance of poisoning themselves with any or all of the reagents if they roll below a natural 5. The DM may always increase the Crafting DC for ingame context.

A poison crafted from only a base reagent will only do damage and not confer any type/effects or augmentation benefits (such as the poisoned condition, etc.) Hence a player should always be on the lookout for venoms and poisons for they base of their crafting, more exotic reagents with interesting effects would be better suited for other adding to a base reagent. For Creature CR’s over 8 the crafter can choose to have a consistent damage or a volatile poison which can do very high or very low damage. 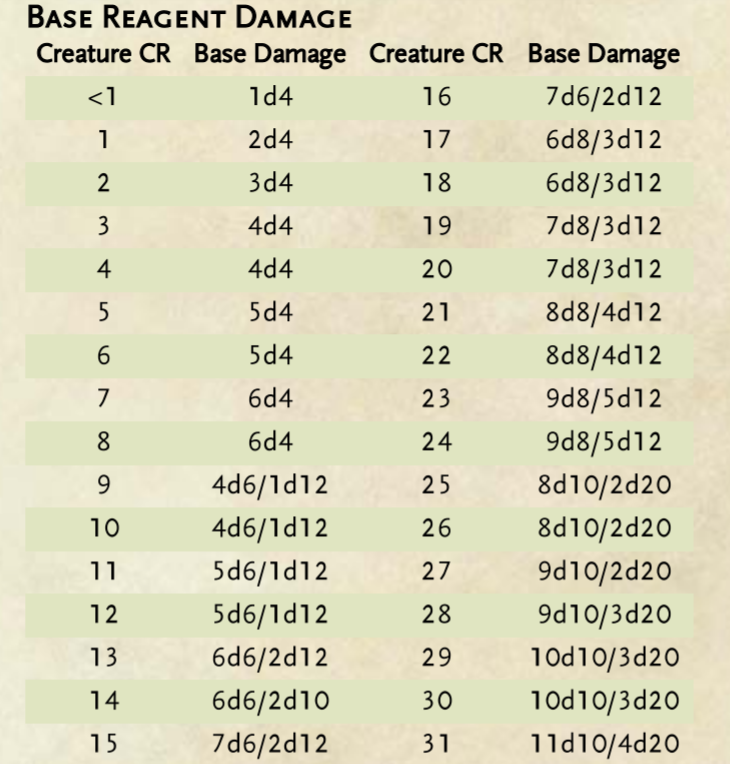 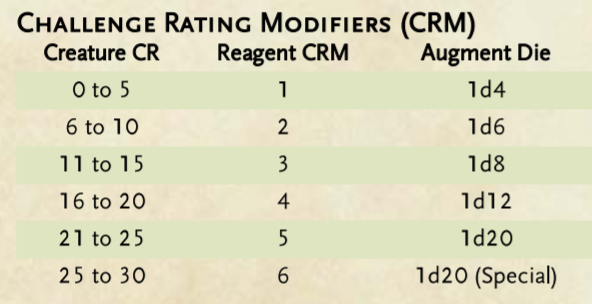 Proficiency with poisoner’s kit allows for a reroll of an Augment Die of d8 or less that lands on “No augment”.

The Augment Die is then represented by the letter B in the augmentation damage tables below: 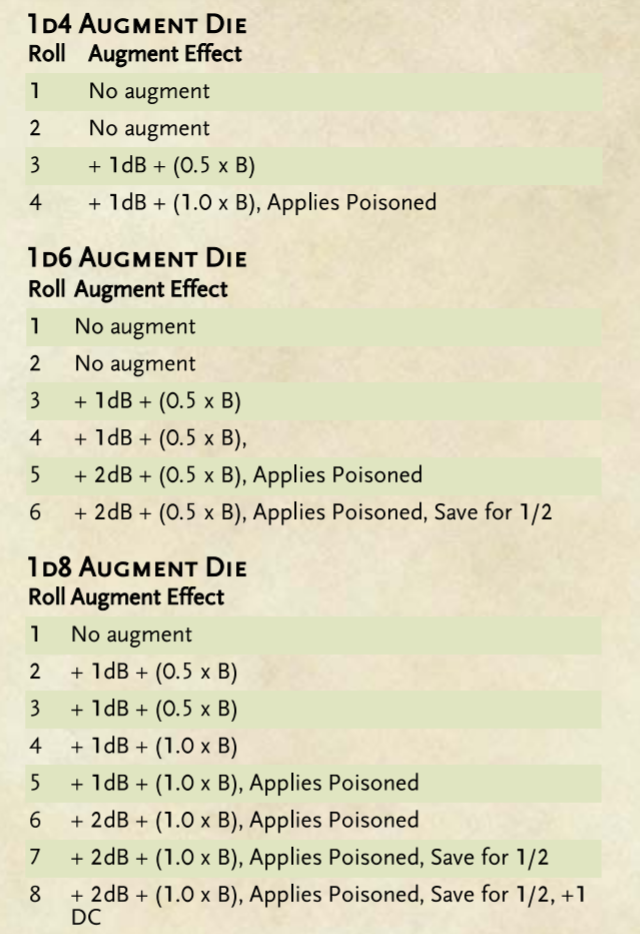 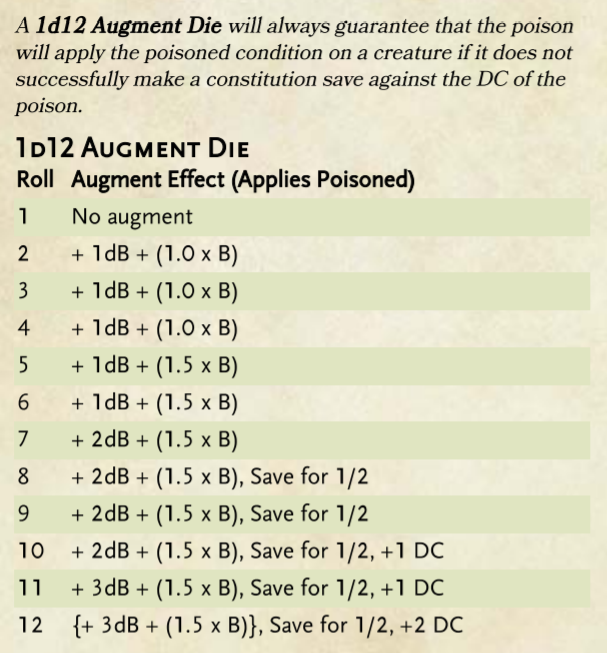 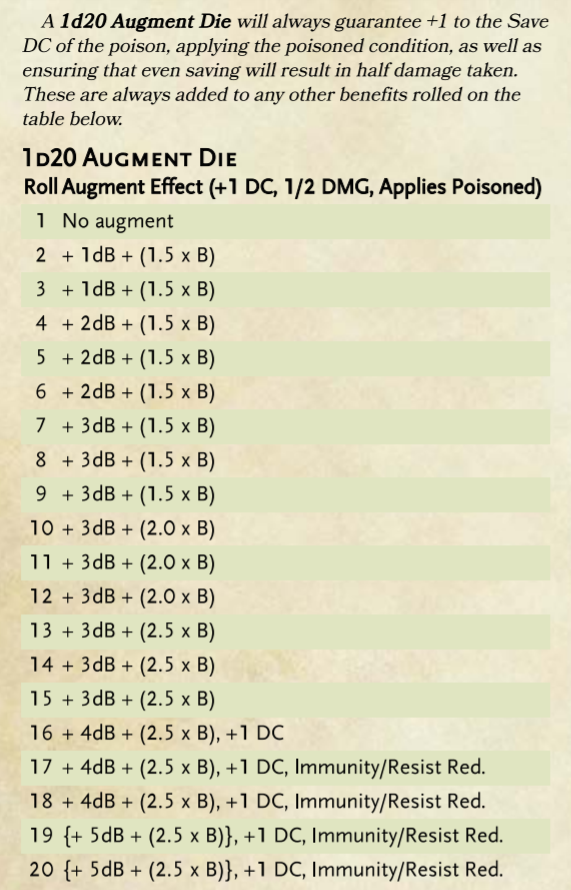 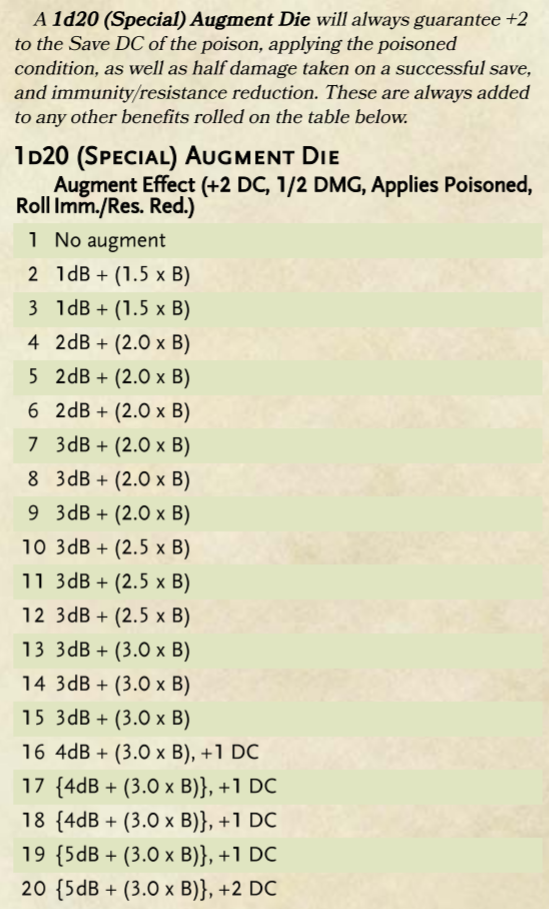 (Notice how the type/effect reagent CRM is not factored here.) 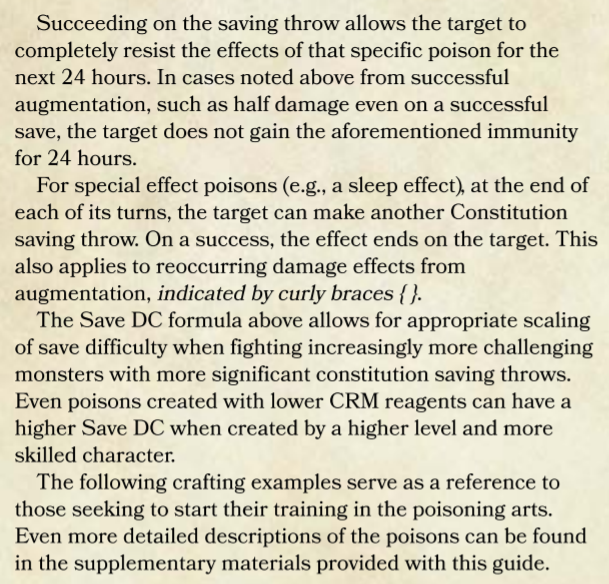 Use in combat and skulduggery

Before crafting the player must announce whether they are crafting a poison to be ingested or for applying to a weapon: once a poison is crafted its purpose cannot be changed and will only work as intended when crafting.

A single use of crafted poison applied to a weapon is effective for one minute or until the target is struck. For ranged weapons a single dose can be applied to one piece of slashing or piercing ammunition.

Just as a snake’s venom can be harvested for a one shot use, so can herbal and alchemical reagents be harvested in this manner for one raw use, such as hemlock or arsenic. The main difference is that herbal and alchemical poisons used without crafting must be ingested in order to have any effect, but even poisons to be ingested do better when crafted.

There is one exception to requiring venom or poison harvested from creatures as base reagents: alcohol can be used as a base reagent (the CRM for crafting is 1). However, using alcohol as a base reagent means that only 1 type/effect reagent can be added (no augmentation), the type/effect reagent must be herbal or alchemical and the poison can only be ingested. Notice that in this case the Save DC is very much dependant on the crafter’s intelligence.

A table for the effects of various herbal and alchemical reagents can be found here (TBD).

These poison rules are a slight adaptation of the Poison Crafting: Revised Rules by Jonathan Chia, which can be found at the DMSguild.

by: Frak_Lou_Elmo
See All Pages

I'm sorry, but we no longer support this web browser. Please upgrade your browser or install Chrome or Firefox to enjoy the full functionality of this site.